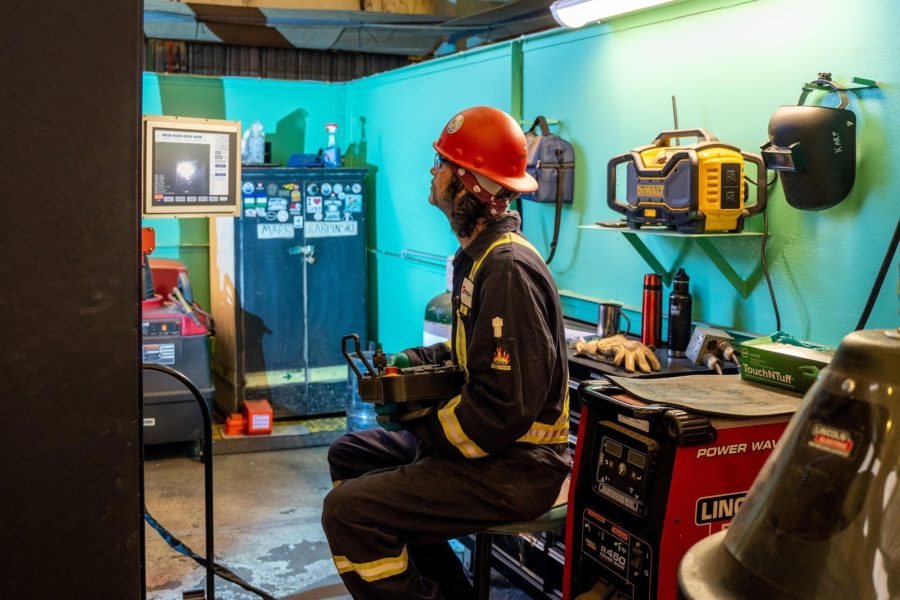 Published by: The Fabricator – January 2021

You might be familiar with collaborative robots, which work alongside humans without the threat of knocking them out as they complete their assigned tasks. If a collaborative robot bumps into a human, it will stop immediately, instead of plowing through the person as if they were an empty cardboard box. In essence, man and machine can “collaborate,” as the human guides the robot’s action or simply works nearby as the robot performs as instructed.

For pipe welding applications, Novarc Technologies, North Vancouver, B.C., introduced its Spool Welding Robot (SWR) in 2016. It was built around a cobot that was designed to be used specifically for pipe fixtured on a rotating chuck. The cobot, armed with a welding gun, moves up and down and forward and back as it performs the weld. Typically, a welder oversees the operation, adjusting the cobot during the welding process if he sees a problem or if the cobot has to contend with sloppy weld preparation, such as a bevel angle that falls outside of expected tolerance windows. The SWR can weld flanges, T-joints, and elbows.

This type of pipe welding traditionally has been the domain of skilled welders. The high-mix/low-volume work called for talented welders who could smoothly go from one job to the next and handle the variances in pipe prep and fit-up. The SWR was designed to alter that dynamic.

“It helps to make the junior welder much more productive,” said Soroush Karimzadeh, CEO, Novarc Technologies. “With the SWR, a junior welder can weld as much as three or four highly skilled welders over an eight-hour time span—and with much better quality.”

Karimzadeh said that metal fabricators and mechanical contractors have reacted positively to the release of the SWR, with Novarc having installed more than 30 systems around the world. But in dealing with the realities of competitive
markets, those same early adopters of the cobot pipe welding technology asked what else the automation might be capable of. Would it be possible to have the cobot work more independently without having a welder watching the operation every second? Could the SWR be set up so that an operator could take on other tasks as the cobot was welding or even oversee multiple SWR systems at the same time?

This inspired advancements over the last two years in which Novarc worked on developing deep neural algorithms that could help the SWR learn and adjust on its own, as a human welder or an operator of the basic SWR system would. The result is NovEye, an artificial intelligence-powered vision system that advances the SWR’s automated welding capabilities. Read More…